Ear Infections: What You Need to Know 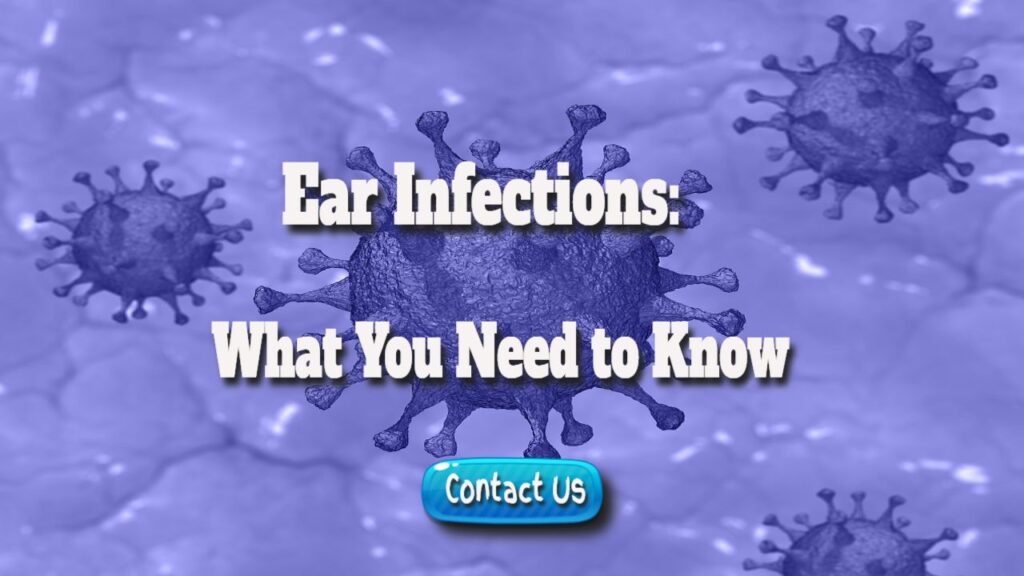 Ear Infections: What You Need to Know

Bacteria, fungi, and viruses can infect the ear canal or the Eustachian tube, which connects the ear to the throat.

Antibiotics, antiviral and pain-relieving drugs, and surgery may be used depending on the type of infection.

The ear is divided into three sections. The visible region of the outer ear is comprised of the ear canal, which leads to the eardrum.

It’s the eardrum that divides the middle ear from the external ear. including tiny bones that amplify sound.

Sounds are transformed into electrical impulses in the inner ear and transferred to the brain.

Bacteria, fungi, and viruses can infect any of these three locations.

The following symptoms of an ear infection may occur depending on the type.

Mild numbness or the sensation that sounds are muffled

the discharge of the ear

itching in the ear

Sores or blisters on the pinna or in the ear canal

Ear noises, such as buzzing or humming

The back of the nose and the ear are joined by a passage called the Eustachian tube. This tube regulates ear pressure and transfers secretions from the middle ear to the throat.

The Eustachian tube’s walls are flat against one other, preventing bacteria and other germs from entering the ear through the nose and throat.

A tiny muscle tightens and opens the tube when you swallow, allowing air pressure to equalise and secretions to drain. When the Eustachian tube becomes obstructed, fluids and bacteria build up in the middle ear.

This can result in ear infections, moderate deafness, and an increased chance of an eardrum rupture.

Among the numerous causes of ear infections and risk factors are:

rapid fluctuations in air pressure, such as during air travel

Eustachian tubes that are smaller than typical or that are plugged

Infants and children are particularly vulnerable to ear infections at an early age.

Insufficient drying of the outer ear following swimming or bathing

Excessive cleaning of the ears might cause scratches in the delicate tissues.

Physical examination and laboratory investigation of pus or discharge diagnose ear infections. A CT scan may also be conducted in some instances.

The following are examples of ear infections:

Ear canal inflammation or infection (which connects the eardrum to the outer ear) is known as otitis externa.

Contact with filthy water or mechanical harm from aggressive cleaning might cause it. A fungus or a bacterium can be the infecting agent.

If the infection is bacterial, ear drops with antibiotics and steroids should be used.

If fungi cause the infection, use antifungal and steroid ear drops.

Ear infection in the middle ear, known as otitis media, can be either short-lived or persistent. Acute otitis media is most frequent in children since colds cause it and clog Eustachian tubes, both of which are common childhood ailments.

The causal agent can be a virus or a bacterium, though research indicates that viruses are responsible for most cases.

Sometimes the eardrum ruptures, resulting in pus in the ear canal, although the eardrum typically heals on its own. Among the treatment options are:

If the infection is bacterial, medications will be prescribed.

If there is pus in the ear canal, use ear drops.

Chronic otitis media can develop from repeated episodes of acute otitis media or a single protracted episode. The chronic infection, if not treated, might rupture the eardrum or harm the delicate structures in the middle ear.

I cleaned the ear thoroughly and applied topical antibiotic drops (with or without steroids).

Strategies for reducing the likelihood of re-infection.

It’s common to hear people refer to glue ear when they mean serous otitis media. This ear infection is most common in children between six months and two years.

Glue ear is a condition that occurs after a middle ear infection and is distinguished by an accumulation of fluid and pus in the middle ear. Antibiotics are one treatment option.

Surgery introducing small drainage tubes may be required if antibiotics do not work if the child suffers from glue ear regularly (grommets).

Infectious myringitis is an eardrum inflammation caused by a virus or bacteria infection. In response to the inflammation, the eardrum forms tiny vesicles.

This can be excruciatingly uncomfortable. Fever is usually often caused by a bacterial infection.

Blister removal by a professional

The mastoid bone is the bone felt immediately behind the ear. Acute mastoiditis is a bone infection induced by prior acute otitis media.

Red and swollen skin above the mastoid, fever, ear discharge, and intense discomfort are all symptoms.

This is a critical condition. If left untreated, acute mastoiditis can cause numbness, sepsis, meningitis, and facial paralysis. Among the treatment options are:

Antibiotics are given intravenously.

Drainage of the diseased bone surgically.

The vestibular system controls balance and is housed in the inner ear. It has three fluid-filled loops (arcuate) that respond to head rotation.

The urethra and saccula, which feel gravity and back and forth movement, are located near the arcades.

When the head moves, signals from these organs are conveyed to the brain via the vestibular nerve, where they are processed.

The primary symptom is severe dizziness, followed by nausea and vomiting. In addition, the eyes may flutter involuntarily toward the affected side of the head.

The following treatments are available for vestibular neuronitis:

Antihistamines and other medications

Vestibular physiotherapy aims to assist the brain in compensating for or retraining the discomfort.

Electrical impulses from the ear are transmitted to the brain via the cochlear nerve. Herpes zoster of the ear is caused by the herpes zoster virus infecting the auditory nerve.

Ear ache, disorientation, and small blisters on the pinna and ear canal, as well as possibly on the face and neck, are symptoms.

Infection can also affect the primary nerve that supplies the face muscles, producing swelling and partial paralysis. Among the treatment options are:

Steroids and acyclovir are examples of antiviral drugs.

Brought To you by – Microsuction Letchworth

The post Ear Infections: What You Need to Know appeared first on https://gqcentral.co.uk