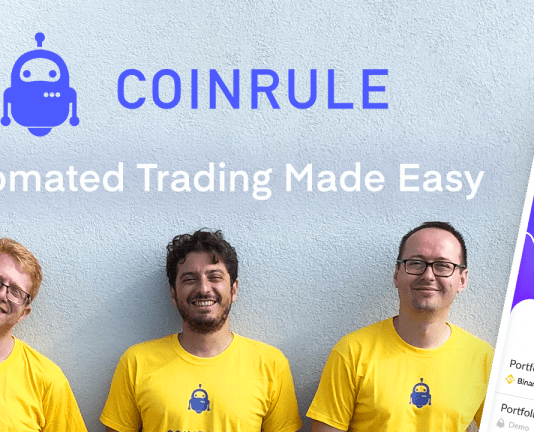 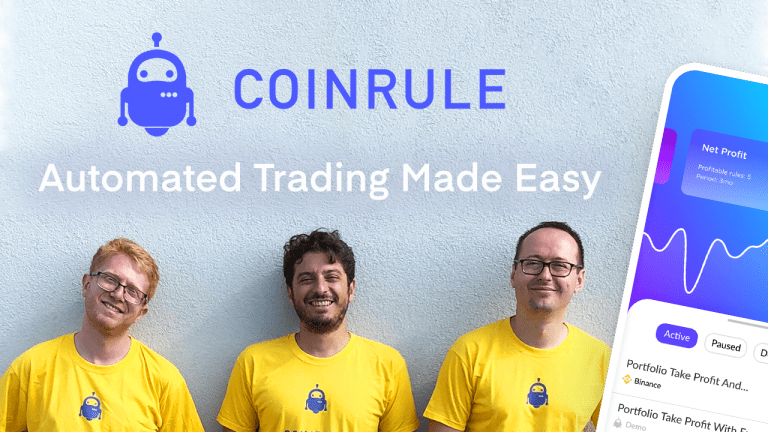 PRESS RELEASE. Coinrule – a hyper-growth, automated trading platform based out of London, UK – is poised for explosive growth in the months ahead, after announcing that its recent investment round on Seedrs secured over 200% of its target, raising $700k, at a valuation of $6m. This funding will allow Coinrule to grow the team, expand into the fast-growing market of tokenised stock trading, and deliver a ‘market leading backtesting tool’, all aimed at furthering their mission of democratizing access to finance.

2020 has been an extraordinary year in crypto, with a torrent of investor cash pouring into the space like the proverbial flood. Through a “beginner-friendly” trading platform that can “catch the next market opportunity on your behalf”, Coinrule’s fast-growing user base has been able profit from the upside gains, while protecting their downside, by automating their trading and investments. Its intuitive interface – which connects to all the popular exchanges – gives users the tools and the flexibility needed to execute any crypto trading strategy, without having to learn a single line of code.

Founded by entrepreneurs Oleg Giberstein, Gabriele Musella and Zdenek Hofler, Coinrule has come a long way since the three met at the Masschallenge Accelerator Programme in 2017.

Compared to those early days, the company is almost unrecognizable. The team successfully raised a seed round from the Fintech Lab of prestigious Hungarian Bank MKB, as well as the investment arm of Zilliqa, ZilHive. A group of 13 experienced angel investors – including John Austin former CSO of IG Index, Robin Bade, former CEO of Mirum WPP, Stelios Gerogianakis, Lead Engineer at Go Cardless, and Oliver Snoody, former Head of Brand Marketing at Twitter & VP of Marketing at Deliveroo – joined this initial funding round, and were soon followed by a coterie of impressive advisors, including none other than Dr Andrea Baronchelli, research fellow at the prestigious UCL Centre for Blockchain Technologies. With such an all-star team, the future looks very bright indeed.

Coinrule recently closed an unusually successful investment round via Seedrs, reaching 209% in overfunding with around $700,000 raised from over 670 individual investors. The mission of ‘giving financial power back to regular people’ and ‘democratizing access to investing’ is clearly resonating well with Coinrule’s millennial target audience, as well as with the tech-oriented investor community.

This fresh injection of capital is explicitly to be used for 3 key goals. Firstly, it will allow Coinrule to grow its very international team – currently 13 staff spread across 7 time zones. Secondly, it will allow them to expand their ‘tradable assets’ to include tokenised stocks alongside their current crypto-based offering, which should open the company up to a new, multi-trillion dollar market. Thirdly, it will allow the team to release ‘the most simple backtesting tool in the world’ – allowing investors to easily compare trading strategies against historical data. A number of exciting and innovative features sit on its long term road map, one of which is a ‘social marketplace’ that will allow users to share strategies and copy/follow the best performing traders.

The Stats Speak for Themselves

Already, Coinrule proudly boasts that a full 67% of its users’ funds are in profit. This isn’t a result of any dark magic or creative accounting. Simply, users have strategies in place – using templates provided inside the app by Coinrule’s trading team, as well as users’ own custom-made strategies – that protect their funds on the way down while ensuring they take profits on the way up.

Active investing isn’t rocket science, even for normal people with little time – so long as you have the right tools at hand. Coinrule’s fresh injection of cash will allow them to further progress their mission of delivering these tools to a much wider audience, and to help build the future of finance via intuitive, automated trading. As founder Gabriele Musella says – “the new world of finance requires levelling the playing field between regular traders and hedge funds. Until that point is reached, we’re here to hustle.’

Coinrule is a beginner-friendly and safe trading platform that enables you to send automated trading instructions to your favorite exchanges such as Binance, Kraken, Coinbase and others. Its intuitive interface gives you the tools and the flexibility needed to execute any crypto trading plan, without having to learn a single line of code.

This is a press release. Readers should do their own due diligence before taking any actions related to the promoted company or any of its affiliates or services. Bitcoin.com is not responsible, directly or indirectly, for any damage or loss caused or alleged to be caused by or in connection with the use of or reliance on any content, goods or services mentioned in the press release.